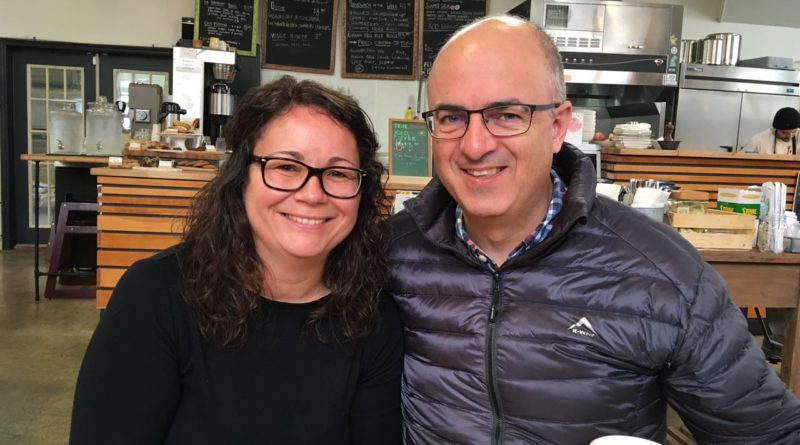 Forgetting what is behind and straining toward what is ahead, I press on toward the goal to win the prize for which God has called me heavenward in Christ Jesus. (Philippians 3:14)

Greetings from St. John’s! This should be our last newsletter from Canada as we will be returning to South Africa soon. Thank you for all your prayers over the past weeks as we waited to renew our visas to South Africa. Thank you as well for giving to support our ministry in South Africa. We praise God for his goodness to us, and there is lots to report this month, so let’s get started!

After nearly eight weeks of waiting, we received our passports last week on Friday afternoon. I was a little nervous as I opened the envelope, since we had no indication if our visas had been granted. So it was an answer to prayer as I opened the first passport from the envelope, Sarah’s, and found that she had been given a student visa. I quickly went through the rest of the passports and found that we had all been given the visas we requested.

There was no time to book our return tickets that day, so we had to wait until Monday to confirm our itinerary. We are now scheduled to return to South Africa next week. God was again good to us, since our tickets were rebooked with no additional charges other than the change fee, and the travel agent was able to reduce the change fee to less than a third of what was set out on the original ticket. Because there was limited availability we will be travelling for nearly three days but this is not so unusual for us.

After we return we intend to apply for permanent residence in South Africa. This can be done without having to leave the country again. If our application is approved we won’t have to apply for visas again. This should save us time and money over the long term, and will reduce the uncertainty that is part of the visa application process.

Our stay in Canada was extended by nearly two months, as we were originally scheduled to return to Cape Town at the end of July. While we had been eager to resume ministry in South Africa, our extended time here has been a blessing to us in many ways. God is good, and in his wisdom he gave us to share extra time with family, friends, and supporters here in St. John’s. We even found time to pick some blueberries!

Because of the delay we were able to celebrate both John and Kristina’s birthdays together, and we can celebrate mine as well before we leave next week.

This past week the Toronto Maple Leafs hockey team were in St. John’s for training camp. John and I were able to attend several events, including an alumni game with some of John’s childhood heroes. It was good to make some new memories with John at these games. Although it may seem trivial, I am grateful to God for giving us this time together.

But the absolute highlight of our time in St. John’s happened shortly after we arrived when we were invited to John and Rebecca’s house for lunch. We were a bit surprised to see Rebecca’s parents there as well, but it was nice to be together so we didn’t think much of it at first. However, after we all sat down to eat, John and Rebecca surprised us with the news that we would soon be grandparents!

John and Rebecca also shared the news with Anna and Hannes in Cape Town. I was a bit surprised by Anna and Hannes’s muted reaction to the news. They were excited to be sure, but they didn’t react as I thought they might. I soon came to find out why. Just a few days later they told everyone that they were also expecting a baby! Both babies are due in March, just a few days apart. The news was overwhelming at first, but again we are thankful for God’s goodness to our family. It will be difficult to be grandparents to our families in Canada and South Africa, but we pray that God will give us wisdom as we try to help both of our expecting children in the coming months and years.

Separation from family has been the hardest part of our ministry in Africa. Jesus spoke about the need to serve faithfully despite the high cost in Mark 10:29-31:

“No one who has left home or brothers or sisters or mother or father or children or fields for me and the gospel will fail to receive a hundred times as much in this present age: homes, brothers, sisters, mothers, children and fields—along with persecutions—and in the age to come eternal life. But many who are first will be last, and the last first.”

I don’t serve God in order to get a reward; quite the contrary, I love and serve God because of his love for me and for everything he has done for me in Jesus. But this doesn’t take away the pain of leaving family behind for years at a time to serve in far-away places. Yet through it all I can testify that God has been good to our family and continues to sustain us through the times when we are apart.

On the sidewalk outside the St. John’s city hall there is a large stone compass that shows the distance to places in every direction from that point. For example, Cape Spear, the most easterly point in North America, is located just eight kilometres south-east of St. John’s. Cape Town, South Africa is located in a line slightly east of this, 11,431 kilometres south-east of St. John’s. Johannesburg is again just slightly east of this, 11,424 kilometres away. I found these points on the compass just a few days ago. It was strange to see Cape Spear and Cape Town so close together on the compass, but so far apart in distance. We will soon be very far from the ones that are closest to us, but we pray that God will keep us close despite the oceans that separate us.

I had been waiting to announce my new ministry in South Africa until after we received our visas. I am now excited to share that I will be serving at the South African Theological Seminary (SATS). SATS is one of the biggest theological training institutions in Africa, with over 3,000 students, including nearly 150 doctoral students. I have been involved with SATS since our time in Zambia, when I taught several Masters courses for SATS in partnership with Evangelical University. Since then I have also been involved in supervising research students and assessing post-graduate research proposals.

I will have two roles at SATS: Head of Information Communications Technology (ICT), and Senior Academic. As head of ICT I will manage projects that will help SATS deliver and administer their academic programmes (as many of you know, I have a degree in Computer Science and have more than twenty years of experience in IT). But my main focus will be on academics, with an increased involvement in working with post-graduate students. This is an amazing opportunity that God has provided at just the right time. Although SATS is located in Johannesburg, they will allow me to be based in Cape Town, so we will not need to relocate (again) in order for me to take up this position.

Once again, we can testify that God is good!

SIM has given us our new budget for the fiscal year beginning this October. There are a few small increases over last year. This leaves us with a monthly need of $350. Despite some significant gifts we have recently received, all of the recent visa-related expenses have left us with a shortfall of about $6,000 in our ministry account. Please continue to pray that God will provide for these needs.

Give thanks to the Lord, for he is good. His love endures forever. (Psalm 136:1)