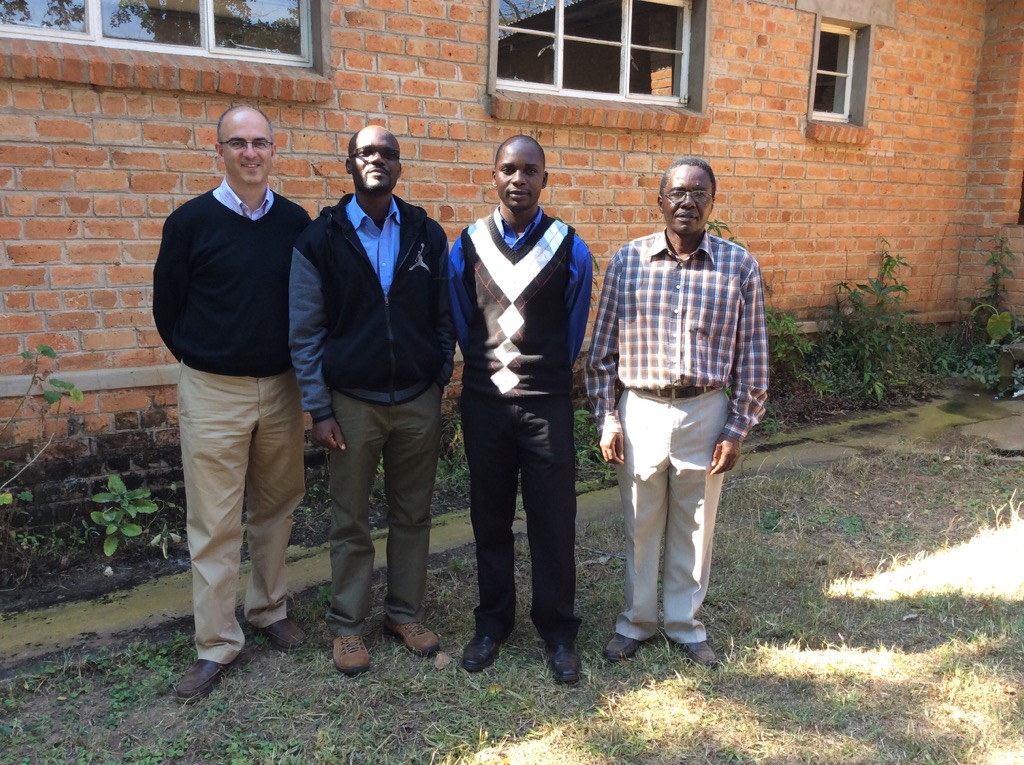 Greetings in Jesus’ name! We give thanks to God for the generous gifts we have received over the past month, and also for the many prayers we know that have been lifted up on our behalf. Your gifts and prayers are sustaining us here in Ndola as we minister to among many churches and pastors here. We echo the prayer of the Apostle Paul to the believers in Corinth, that you will be enriched in every way so that you can be generous on every occasion, and through us your generosity will result in thanksgiving to God (2 Cor. 9:11).

This month’s newsletter is long but filled with stories and pictures from our travels across Zambia this past month. Enjoy!

The Evangelical Church of Zambia (ECZ) continues to train pastors at several locations in Zambia, including at the Chizela Campus about 500 kms west of Ndola. Since the distance is great and the roads are rough due to the large number of heavy trucks that service the copper mines in the area, I broke the journey over three days, spending the nights at a lodge in Solwezi, about halfway between Ndola and Chizela. I traveled with an ECZ pastor who completed a diploma at TCCA several years ago and has returned to TCCA to upgrade to a degree. In fact, the pastor’s father had trained for ministry in Chizela nearly 30 years ago, and this was my student’s first return to the college since his father graduated when he was just seven years old!

We left Ndola on Sunday afternoon and spent the night in Solwezi, then set out before sunrise for Chizela, arriving around 9 AM. I sat in with my student as he taught the first lecture in the Christian Marriage course. There were about 30 students present, as the wives joined their husbands in the class. My student switched back and forth between English and Kaonde since some of his students were not fluent in English, while others spoke local languages other than Kaonde. Another challenge was the wide range in the level of education among the students. It was such a blessing to see my student interact so well with his students, even though he confided later that he struggled to present the material at a level that all his students could understand.

After the class I had the privilege of preaching in Chapel as my traveling companion translated into Kaonde.

From there we had tea with the Principal. The school has gone through many struggles in recent years, and the Principal is the only lecturer remaining at the school. He has to rely on pastors to come and teach short modules, so he was very thankful to have a TCCA intern to share the teaching load for this term.

After tea I met first with the Principal privately, then with my student. He was greatly encouraged by my visit. I also brought his Greek New Testament and a power cord for his computer – he’d been unable to use his laptop for three weeks! Following our time together I met with a group of students to discuss how things were going before returning to the Principal’s house for a late lunch.

It was late in the afternoon by the time we set out (together with the Principal!) for Solwezi. On the way back we stopped in Kasempa to meet the pastor’s father, pick up a Kaonda Bible for one of his church members, and meet with some SIM friends who work at the mission hospital.

As the sun set we returned to my van for the remaining three hour drive back to our lodge. It was so disappointing to find that one of the rear tires was completely flat, even though the tire was new and had been inflated the day before this trip. We swapped the flat for the spare and stopped in a local shop to check on the flat, but it was beyond repair. So we set out in the dark on the spare tire and prayed that we would make it safely back to Solwezi. God was faithful and answered our prayers, so we arrived back at our lodge around 9:30 PM. The next morning we were able to get new tires installed and returned safely to Ndola by the evening, about 1,230 km later.

After a day in Ndola our whole family set out on Thursday morning to visit the three remaining interns over the coming week. The first stop was Lusaka. I spent Friday with an intern at Kawbata Baptist Church. The pastor of this church, Conrad Mbewe, is well known outside of Zambia in some circles. The church runs a year-long internship program for training pastors as part of a missions strategy that is planting churches across Zambia and throughout sub-Saharan Africa. Kabwata modified their  standard internship program to allow our student to participate. I had the opportunity to spend several hours discussing the internship with my student, as well as meet with his supervisor and take a tour of the church grounds.

I had arranged for two recent TCCA graduates to join us for lunch. One is now part of the pastoral staff at a large church in Lusaka, but next year he is planning to plant a church in a community more than 1,000 kilometres from Lusaka. The other graduate is pastoring at another large church in Lusaka and has also started in the SATS Masters program at TCCA. It was a great joy to encourage these good friends in their various ministries, and also to share some good fellowship and laughs together.

On Saturday we drove from Lusaka to Livingstone, arriving just in time to watch the sun set over Victoria Falls. On Sunday morning we joined another intern for Sunday worship. The church has two services every Sunday morning with a total attendance of close to 500. My student was asked to preach in the second service. After arriving at the church we were, as expected, brought to the front and seated in comfortable couches next to the pastor. The singing was typical of many Zambian churches, with a worship team led the congregation in number of choruses in English and vernacular (in this case, Nyanja and Tonga). The women’s choir danced into the church and sang a several beautiful choruses before dancing back out. After this time of worship the pastor introduced us to the congregation. My student then preached an excellent sermon entitled “Called to Serve,” using 1 Corinthians 1:1-9 as his main text.

After the service I met with the pastor in his office to discuss the internship while Kristina and the girls got to know the Pastor’s family and some of the church members. We returned to our lodge for lunch and so that I could spend some quiet time meeting with my student. After our meeting we still had about two hours of sunlight, so we quickly changed and visited Victoria Falls again with the intern. This was a beautiful end to an unforgettable day!

The next day we took a break to spend some family time together visiting Chobe, a game park in nearby Botswana. You’ll find a few photos from our trip at the end of this newsletter.

On Tuesday morning we set out to meet the last intern, who is teaching a large girls’ school in Macha. She took a bus from the school to meet us halfway in Choma, where we stopped for lunch together and where I met with her to discuss her internship.

On the drive back to Macha after lunch she shared stories from the local area. As we passed one farm she explained how the farmer had been recently killed by a leopard. At another place she told us of a local man who was said to be involved in witchcraft. The man had apparently cut his heart out and put it into two monkeys, which he kept in a locked box. One day he left home to go on a journey. While he was away his wife found the cage and dared to open the box. She was shocked to find that the two monkeys had faces that looked just like her husband! She was so surprised that the monkeys seized the chance and escaped. When the man returned home and found that the monkeys had escaped he became very angry. He feared that he would die if anyone killed the monkeys since his heart was inside them, so he offered a very large reward for their return. At this point the story ended, and she was unsure if anyone had found the monkey or what happened to the man!

Such stories of witchcraft are not that unusual. In fact, some of her students had come to her with fears that they had been secretly initiated into satanism, or that some of their classmates were satanists. For example, one of her students had been told that she must have been initiated into satanism because they had heard her speaking in her sleep. My student was able to discuss this with her and pray with her, and now her fears have gone.

My visit to the school was memorable. Both the Principal and Deputy Principal of the school are TCCA graduates, with the deputy serving as my student’s immediate supervisor. He gave me a tour of the school, after which I met with him.Since there were no classes on the day we visited, I asked the intern if she could gather a group of students so that I could meet with them. To my surprise, I found that she had gathered an entire class of about 40 girls in their school uniforms. They were such a great group of kids, eager to learn and with a joyful spirit. I had a very good time with them discussing what they had learned and how they were enjoying the intern’s teaching. After we finished the girls were very excited to pose for some pictures! I met one last time with the intern before parting.

We stayed at a local lodge for the night before eventually returning to Ndola on Thursday. The entire trip covered about 2,050 kms, but the time was well spent. These visits were a big encouragement for my students. I thoroughly enjoyed seeing them in their various places of ministry. The trip was also a great learning experience, as we now have a better understanding of local ministry contexts. This will be invaluable as we continue to develop TCCA’s curriculum,  especially during the transition to Evangelical University (EU).