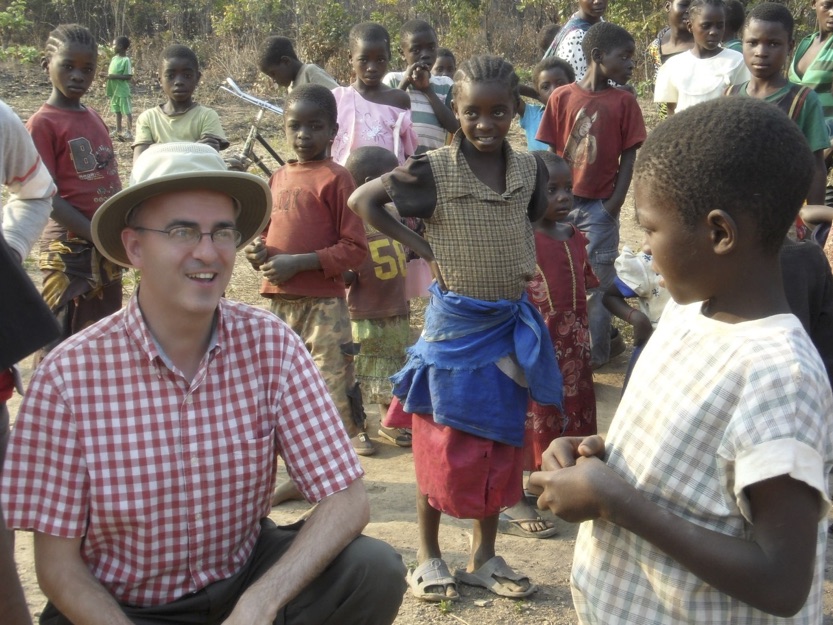 On Monday we toured several remote areas of the Copperbelt with Faith’s Orphan Fund, a group of people who help to support orphans and others in need of assistance. Kristina and I both wrote down some of the things we saw on this memorable trip.

We went on a very interesting day trip yesterday, leaving at 7 AM and didn’t get home until 8:30 PM. We drove many hours to remote villages with a Zambian lady who runs a orphan project and now sponsors 3,900 children in numerous villages and centers in the area around Kitwe and Solwezi. The villages were remote so we were soon off the paved roads. We all had piles of dust and dirt on our hair, faces, arms, anything that was exposed. Even our eye lashes. It was quite an experience to see how these people live with no electricity or water. The nearest clinic is staffed by 2 nurses that live hours and hours of a walk away. All the food they eat is what they can grow there and can find on the land. Some of the kids walk hours to school and the little ones can’t even go because it would take them so long to get there that half the classes would be over. Some of these kids will never leave the village and see anything of the outside world. Some may get to Kitwe the nearest big town or maybe Ndola…

We travelled on one of the ubiquitous blue buses all the way to the ends of the bush, with so many kids coming from literally nowhere. We drove to one place with probably 200 kids and some parents waiting for us. The “road” we had to take to get there was about a kilometer off the main road, which itself seemed to be pretty much in the middle of nowhere. The last road was so narrow that the van barely fit. Yet most of the people seemed to come from villages that were beyond the end of the side road, with no way to drive there. There was a little ceremony and we gave out some clothes for the kids. I was even asked to give a speech (unbeknownst to me). ZNBC, the national Zambian TV station, sent a TV crew and reporter with us so I may be on national television here in a day or two. As we were driving away in the bus, a chief from one of the villages came with a big load of bananas, a single piece cut from one tree that a person could hardly carry. Another village chief came running from another direction with a live chicken that he passed into the van through a window. So we had a chicken under our seat the whole way back.

In the second place we stopped one of the boys had a football made of rags and strings. After the ceremony I got a translator and asked him his name (Emmanuel), what grade he was in (3), if he liked football (yes) and so on. I also asked him what his favorite team/club was and he just looked at me. The translator asked again but he didn’t seem to understand what I was asking. When we were driving back on the bus I sat next to Ernest, one of the students from the skills training center in Kitwe who had traveled with us for the day. He’s now 23 but he grew up in that village and only moved to Kitwe last year. He said that the boy probably had no idea what I was asking. They would have no newspapers, and no electricity so no TV. Maybe they’d hear something on a radio from time to time, or perhaps from others in school. Ernest has only made it as far as Ndola a time or two, never seen the new Ndola shopping mall, only passed by the new Ndola football stadium, never been to Lusaka. He said his dream was to go to Victoria Falls. He was such an articulate, well-spoken young man, a believer who attends a Baptist church. Now we’re friends on Facebook, so I hope to be able to stay in touch with him.

I hope that gives you an idea of some of the things we saw. It’s amazing to learn more about the people and the place where we live.